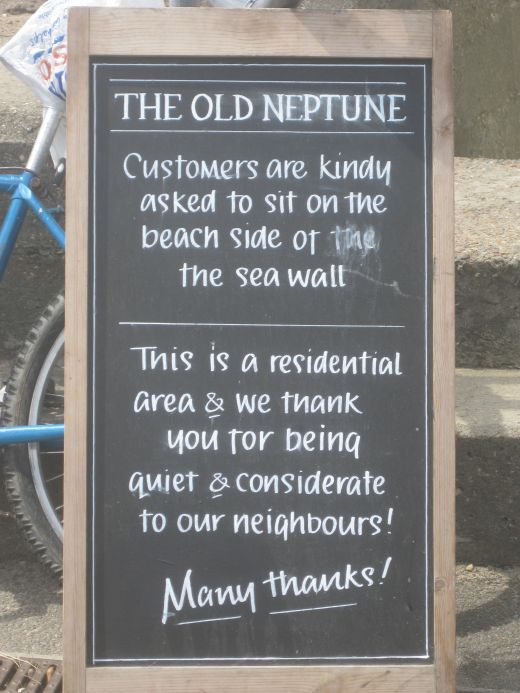 Whitstable Moan: The Sign Outside The Old Neptune Pub

For the second year running this sign has appeared outside the Old Neptune pub in Whitstable. It basically tells drinkers not to sit on the landward side of the seawall with their drinks, but to sit on the beach instead.

It is only drinkers from the Neptune who are being asked not to sit on the seawall. The people who live on Marine Terrace often congregate on the seawall, and can regularly be seen with bottles of wine and glasses in their hands.

Also, anyone can go and buy some beer or a bottle of wine from Threshers on the High Street and sit on the seawall and drink if they like.

It is patrons of that great pub, the Old Neptune, who are being picked on here. Who by I wonder?

I don’t think we have to look far to figure that one out.

One of the things that has always annoyed me is people who buy property near pubs and who then spend inordinate amounts of time and energy complaining to the pub about the noise.

The Neptune isn’t the only pub to have been subject to this sort of pressure.

Listen, everyone: if you don’t like the noise of a pub, don’t move next door to one. It’s that simple. Go and buy a house somewhere else.

There ought to be a law that enshrines the right of public establishments to remain as they are.

Of course, in the case of the Old Neptune, there are other things to be taken into consideration. Like money for instance. It’s on Marine Terrace. We are looking at some of the most valuable and desirable property in North Kent here.

I just checked it out on the net. House prices on Marine Terrace can be anywhere up to £525,000. That’s half a million quid for what is basically a 2 bedroom weekend cottage.

I suspect that a number of people living on Marine Terrace own more than one property.

I wonder if the value of these properties has anything to do with the pressure being applied on the Neptune to keep drinkers off the sea wall?

The annoying thing is that people have been sitting on that seawall with drinks supplied by the pub for as long as the pub has been there. Since some time in the late Bronze Age, I suspect. Certainly for as long as I‘ve been in Whitstable, which feels almost that long at times.

I remember the first time I came down the beach and saw the pub there, with people sitting out on the wall, laughing and carousing, with drinks in their hands. “What a great place for a pub,” I thought.

I think if you did an archaeological dig of the area around the Neptune you would find evidence of several ancient cultures gathering there to do just what the current drinkers do in this spot: drinking and watching the sunset.

The Old Neptune is known around the world. It has its problems, of course. Personally I hate having to drink out of plastic glasses, though I can understand the reasoning behind this. Sometimes the service is a little slow, and it can get too crowded at time.

But – with a view like that – how can anyone complain?