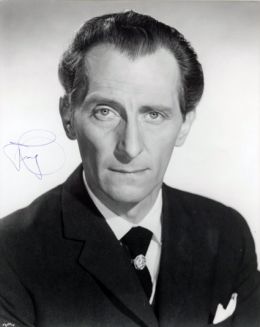 You may have seen Alan Davies, the comedian, on QI with Stephen Fry, quoting from a song about Whitstable.

Alan Davies, as you probably know, is the stand-up comedian and actor most famous for his part in Jonathan Creek.

What you may not know is that his first gig was at the Whitstable Labour Club.

It must have been here that he heard the song, “Peter Cushing Lives in Whitstable” by the Jellybottys, which he quoted on QI.

Here are the lyrics, as I remember them:

PETER CUSHING LIVES IN WHITSTABLE,
YOU CAN SEE HIM ON HIS BICYCLE,
HE GOES SHOPPING FOR HIS VEGETABLES,
ARRRRRGGGGHHHHH!!!!!!!!

That “arrrrrgggghhhhh!!!!!!!” was meant to be the scream of terror that Peter Cushing would certainly arouse by his very presence, being, as he was, the master of suspense and mystery in many of the Hammer Horror movies. Even seeing him on a bicycle would inevitably cause such a reaction. Such, at least, was the implication.

It wasn’t true of course. Far from being a figure of horror, in real life Peter Cushing was the model of polite charm and decency. A proper old-fashioned gentleman. You would, indeed, see him on his bicycle, and if you greeted him you were always sure of a courteous reply.

I canvassed him during an election one year. He said, but in the most polite way, “As an actor I don’t take a position on politics.”

His favourite place was the Tudor Tea Rooms, where you would often find him. All the old ladies knew he went there, and would position themselves around him at the appropriate time, but he paid no attention. I think he preferred the company of the young waitresses.

The Jellybottys, meanwhile, were virtually the resident band at the Labour Club. Unfortunately, they were a one-hit wonder. I mean: they used to do a set, including some romantic numbers, but no one was really interested. All anybody ever wanted to hear was that one song. It was their star-turn.

Why were they called the Jellybottys, you ask? ‘Cos they made your bottom wobble. When they played the Peter Cushing song everybody got up to dance.

An odd postscript to all of this was the time I went to Stornoway in the Outer Hebrides. It’s a long way: about as far from Whitstable as you can go without falling into the Atlantic. Someone asked where I came from, so I told them.

The response was immediate.

He knew all the words.

The explanation was simple. Deake, a member of the band, and the writer of the song, had been in Stornoway for a wedding not long before, and had sung the song to the assembled company. It had become as almost as famous in that wild and stormy outpost of the British Isles as it had previously been in our own snug little town.

After Peter Cushing died the funeral took place in Whitstable. It was a place he had loved, where he had spent the last years of his life, long before the town became fashionable with the London Luvvies. There were thousands of people on Harbour Street, come to pay their respects.

There are several places around town now which preserve his memory: most notably Cushing’s View off Island Wall, and the Peter Cushing pub in what used to be the old Oxford Cinema on Oxford Street.

You can also find the place he used to live, on Sea Wall, marked by a blue plaque.

The story was that he kept a room as a sort of shrine to his beloved wife, who had died some years previously.

Another story is about a certain well-known Whitstable person who bought Cushing’s house for the kudos, but who ripped out the shrine because it wasn’t in keeping with his taste.

Some people have no soul.