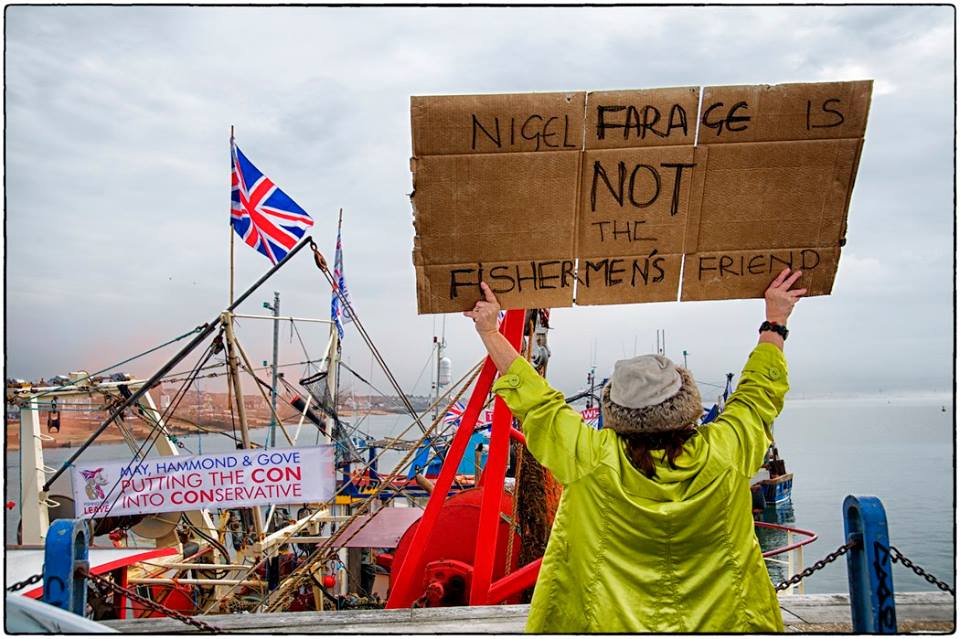 Nigel Farage is not the Fishermen’s Friend

All photographs by Gerry Atkinson: http://www.gerryatkinson.com/

I went along to Whitstable harbour to greet Nigel Farage on Sunday. He was there ostensibly to support the local fishermen in their protest about the transitional deal being imposed upon them by the EU, which the fishermen oppose.

It was a colourful affair with Whitstable’s fishing vessels circling picturesquely outside the harbour, setting off flares and smoke bombs and firing distress signals into the air, which shrieked upward in an arc of smoke and then exploded with a loud crack.

The fishermen seemed to be enjoying themselves, and I saw a number of them clutching cans. Is there such a thing as being drunk in charge of a fishing boat, I wonder?

There were people from both sides of the argument there, both Brexiteers and Remainers, plus at least one – namely me – caught firmly in the middle, having voted for Brexit, but from a Left Exit, not a Ukip, point of view.

The contradictions within the crowd were evident. The Remainers were holding EU flags, while the Brexiteers were flying Union Jacks. Both claimed to be on the side of the fishermen.

The fishermen, meanwhile, while they probably voted to leave, are actually left in the worst of all possible worlds: the British Fishing Industry having been being locked into the Common Fisheries Policy by the transitional deal until the end of 2020, but without a say on quotas. By that time the entire industry could be decimated. No wonder they feel betrayed.

This was made evident by the old fishing boat they set light to on the beach, which they had renamed Thereason May: a clumsy pun on our Prime Minister’s name, obviously accusing her of treason.

Quite how the metaphor of “burning your boats” applies to this situation wasn’t made clear.

A number of good friends were there, including Julie Wassmer with her megaphone, and Christine Dorothy, who had made a sign based upon an acronym of Nigel Farage’s name. It said: “Fisherman’s Advocate? Real Agenda Gargantuan Ego!”

Farage himself arrived at six o’clock. He climbed on board the Site Seeker Whitstable Boat Trips vessel in the harbour. When he passed through the harbour entrance there were people on the jetty jeering.

What is it about this man? Up until this point the gathering had been mainly peaceful, but it was as if his presence galvanised the crowd, which became instantly divided into separate camps.

Fights started to break out, with people from both sides attempting to grab the others’ flags. I saw one Remainer woman being punched in the face, while one of the smaller boats edged close to the shore and sprayed the Remainers with sea water. I have a photo if anyone wants to make a complaint. Technically this was an assault.

Farage’s belated attempt to hi-jack the fishing industry’s concerns is belied by his voting record in the EU. Official records show that over the three years while he was a member of the European Parliament Fisheries Committee, he turned up for just one of 42 meetings.

Greenpeace states that “during three major votes to fix the flaws of the Common Fisheries Policy, Farage failed to vote in favour of improving the legislation.”

The irony of all this is that it isn’t only the EU that is at the bottom of the Whitstable fishermen’s woes. According to Greenpeace, fish quota allocation favours large over small vessels, with just three large fishing firms controlling nearly two-thirds of England’s fish quota.

“The distribution of fishing rights within the UK’s fleet is entirely the responsibility of the UK’s fisheries minister,” they say.

Quite how a public-school educated ex-commodity trader came to pose as the fishermen’s friend is another matter.