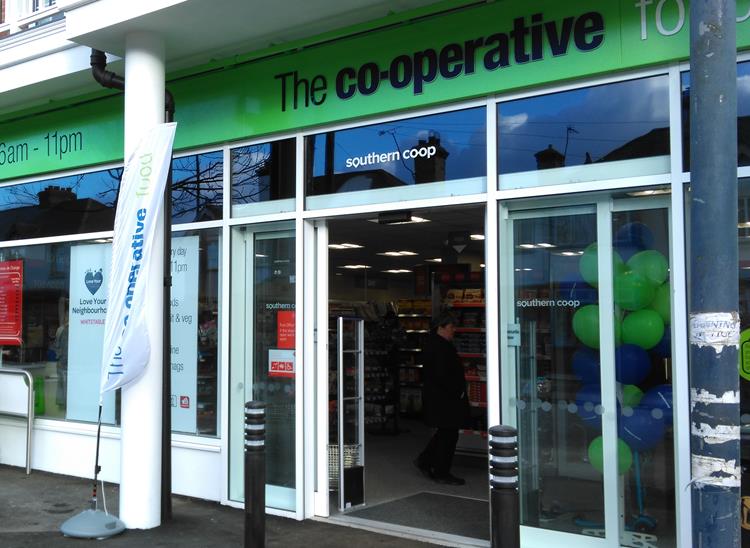 How many Co-ops does one town need?

Whitstable has four of them. There’s one on Canterbury Road, one on Oxford Street, one on Faversham Road, and now the new one on Cromwell Road, where the old delivery office used to be.

Every one of them carries exactly the same stock.

The new one also doubles as a Post Office. Whitstable needed a Post Office. It didn’t, however, need another Co-op. So while the Co-op is often half-empty, the Post Office, which only has two counters and one member of staff on at any one time, can sometimes have queues running out into the shop.

What half-baked turnip thought it was a good idea to give planning permission for a new supermarket right in the middle of a residential area? Didn’t anybody imagine that it might lead to trouble?

The first problem, immediately, was the amount of light it bled out into the street. It was like a stadium down there, like there was a football match going on every night on Cromwell Road. The light blasted into people’s bedrooms making it impossible to sleep.

The residents complained to Environmental Health but it took 6 months before that was toned down to tolerable levels.

After that it was the youths gathering at night, swigging out of beer cans, smoking skunk and squabbling amongst themselves; or pulling up in suped-up cars, music blaring, with the thud of the bass-line like a booming heartbeat. They’d leave their engines running, while the doors would slam twice – once on the way in, once on the way out – before roaring away again.

Finally it was the early deliveries, sometimes as early as 6.20, before it had even got light.

If you’ve been kept up late at night by the tribal rituals of rowdy youth, the last thing you want to hear is the bread van pulling up at 6.20 in the morning, slamming doors and rattling crates about.

Of course the residents complained, both to the Co-op, and to the council. It’s against planning regulations for deliveries to be made before 7am, as if this wasn’t early enough already.

So the residents complained again. Again the council spoke to the Co-op. Again the Co-op said they were dealing with it. Again the case was closed.

And on and on and on like this, over and over again. It was like they were kicking the can down the road, as if the only thing that mattered was the procedure, not the result.

The new Co-op opened in February 2018. It’s been more than a year, and still the deliveries are turning up before 7am.

The thing is, all of this was predicted. If you read the objections to the development on the council website you’ll find concerns about light pollution, traffic volume and noise all listed in there. Everyone already knew it would cause a problem.

The irony of all this is made clear in the notice the Co-op has in its window. “Love Your Neighbourhood” it says.

Bitter smile from the neighbours. If only….