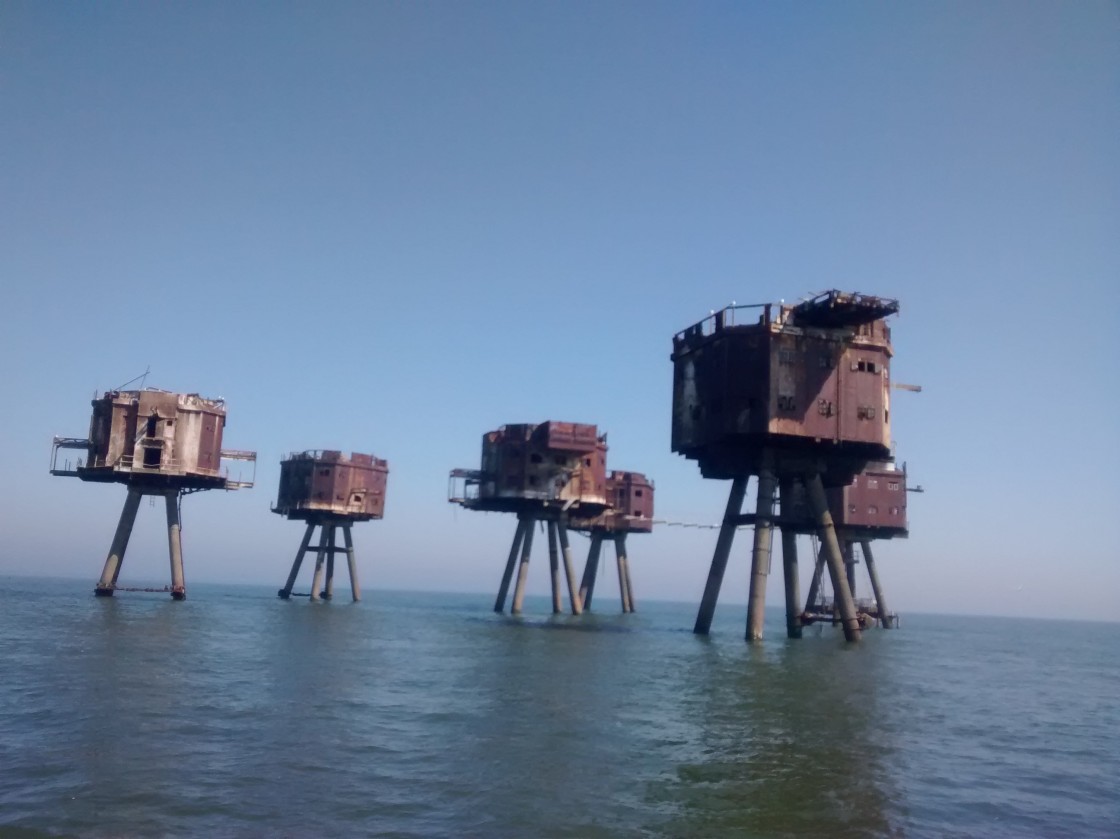 “Was the ghost of David Elliott trying to contact us by electronic means?”

It’s been a memorable week. Firstly my family were over: my brother from America, and my sister from Tenerife. We were burying our Dad’s ashes next to Mum’s in Whitstable cemetery.

We cracked open the last bottle of Dad’s home-made Elderberry wine. Unfortunately it was undrinkable. It was sixteen years old and it hadn’t aged well. But we poured some of it into the grave, alongside a picture of Mum and Dad on their wedding day, while my other sister read something she’d found tucked away in Mum’s jewellery box, which had obviously been left for just this purpose.

Later in the week, on Easter Saturday, I was also involved in helping a friend scatter his Dad’s ashes out at sea, near the Maunsell forts.

This was the first time in over 35 years of living in Whitstable that I’ve been to the forts. Close up they are an impressive sight: like the rusting relics of some ancient alien invasion which took place centuries ago.

I read a piece I’d written called The Secret Life of Waves. It’s about wave formation and how this relates to the process of life and death on this planet; based on a TV programme of the same name which I had watched only a few weeks after my Dad had died.

While I was reading my friend Mary’s phone kept going off. The Google assistant was making random announcements in the middle of my talk. I had to stop reading at one point to ask her to do something about it.

Later, after I’d finished, she told us what had been causing the disturbance. For some inexplicable reason her phone had landed on the Wikipedia entry for someone called David James Elliott and was trying to alert her to the fact. He’s a Canadian actor of no particular importance.

What is remarkable is that the name of the person whose ashes we were there to scatter was also David Elliott: middle name Edward, as opposed to James, but otherwise the same.

I’m not quite sure how you would account for this. Materialists would say that it was a coincidence, but would have to admit, even then, that it was a pretty remarkable one.

Jungians have a word for it. They call it synchronicity, which according to my on-line dictionary, is “the simultaneous occurrence of events which appear significantly related but have no discernible causal connection”.

I’m not sure what to think. Is there an “acausal connecting principle”, as Jung would have us believe? Or was the ghost of David Elliott trying to contact us by electronic means?

That’s strange in itself, and gives a new twist on the notion of haunting, that a modern ghost would use the internet to go about it.

Of course the other possibility is that Mary had accidentally activated her Google account which had overheard the name David Elliott – often mentioned in the course of the afternoon – and had then looked up the Wikipedia entry.

I suppose, on reflection, that this explanation is the most likely, although it did seem uncanny at the time.

Of course all of this was taking place during Easter week, a time when, traditionally, we are supposed to be meditating upon the meaning of life, death and the resurrection.

My only observation is that life goes on. Even in the midst of our ceremonies the sun was shining, the flowers were blooming and the birds were frisking about in the blossom-laden branches, engaged in their on-going Spring rituals.

Really, under these circumstances, it’s not possible to be sad.

The Secret Life of Waves

As read out near the Mauncell Forts Saturday 20th April 2019:

I only met David Elliott the once, at the sheltered housing in Canterbury where he spent his final days. I was taking Jon to visit.

There was a meeting in the common room. The vicar was there. David was talking to the vicar at the top end of the room. They were both standing, as if on ceremony, David with his back to the wall, and the vicar standing before him, like a subject before his King. David was shaking the vicar’s hand warmly, looking him straight in the eye and declaiming loudly in a voice suffused with wry good humour.

“I’m a hundred years old,” he said. “I might not be around next week.”

This wasn’t what I had expected. I knew that David had dementia and had been depressed, but in this room full of lost, lonely and desperately confused people, he stood out like a lantern in a cave.

It is true that what he was saying wasn’t actually true, in the strictest sense of the word, but he said it with such verve, with such confidence, that it might as well have been.

He had a patch over one eye, which made him look like a pirate, and huge hands which entirely enclosed the vicar’s normal sized mitts.

He had been a railway man most of his working life, and he was a steam train enthusiast, Jon told me.

Later he came and sat with us, and I was made aware of the deep affection between them.

Jon had lived with his Dad for many years, in a council house in Whitstable, where David soon became a local character. Jon said that often, when he was in town, the shop assistants would ask if they were related. When he said yes, they would get all enthusiastic, telling him how much they enjoyed talking to his Dad, and how they looked forward to him coming in as he brightened up their day.

She said both Jon’s Dad, and Tory councillor Ashley Clark, had been fighting against the Devine Homes development on Duncan Down. One day someone had cut through the wire fencing that the company had put up to stop people accessing the land.

Later Ashley and David, accompanied by his three legged dog, found themselves sitting on a bench nearby. Ashley said, “whoever cut that wire must have been an angel.”

David opened up his bag to show the ex-copper the bolt croppers he had tucked away in there.

“You might be sitting next to an angel,” he said.

Jon also gave a eulogy which he ended with a beautiful thought. He said: “I feel somewhere between science and mysticism the quantum universe does not forget such spirits and characters like his and he may be on a higher plain or in another dimension waiting for us to join him.”

Jon is much wiser than he thinks. He often surprises me with his observations about life.

It was Jon who helped me to get over the death of my own father. He told me about a programme he had watched on TV, and suggested it gave us an insight into life and death.

The programme was called The Secret Life of Waves. It was made by David Malone, and it was on BBC 4 on the 31st July 2018. This was not long after my Dad died, so I watched the programme at Dad’s house on i-Player.

That was strange, watching a programme my Dad wouldn’t have watched, mid-afternoon on his TV, without him there.

It’s a science programme, about waves and wave formation, but it contains an odd piece of biographical information, which is why it stands out.

At the beginning of the programme we are introduced to David Malone’s Mum, who is sitting on a bench with her husband, on a cliff overlooking the sea. It was this view, Malone informs us, that first informed his fascination with waves.

“What is so exciting about waves is that they reveal what is usually hidden from view,” he says. “You can actually see energy in action. They present insight into the forces that rule the Universe. Waves are not made of water. It’s not the water that’s moving, it’s the energy. Water is the medium that transmits the energy. Waves are a form of transport of energy.”

The bulk of the programme consists of various demonstrations of the truth of this proposal.

“Energy is the invisible force that drives the Universe,” he says. “Energy can never be destroyed, it can only change from one form to another. Even after the wind dies the energy lives on in the waves.”

This is when the programme shifts, and he starts talking about waves in general, as opposed to the watery waves we’ve been discussing so far.

“Waves of energy are found throughout the Universe,” he says. “The world is actually filled with waves. Everything is in motion, in process. Waves are process.”

Thus mountains are in the process of rising and falling, like the waves in the sea; it’s just that we don’t see it this way as it is happening too slowly for our eyes to register. There are hidden waves throughout the world, too fast, too slow, or in a medium too invisible, for our eyes to catch a glimpse of. There are waves in the vacuum of space, waves in the congealed weight of matter, waves in the air, waves in the sea, waves of heat and waves of cold. There are waves in the terrifying expanse of intergalactic space-time, and in the infinitesimally small, paradoxical world of quantum reality, where thoughts can influence matter. Waves are everywhere, as movement, as change. Everything is in the process of change. The Buddha said this too, over two and a half thousand years ago.

“Our lives are in continuous change,” he adds, speaking about the human dimension now, “a dynamic process of change.”

It’s at this point that he tells us that his Mum had died during the making of the programme, and that he had been thinking of her the whole time.

Life too is a wave, he was saying. It is a wave of energy that passes through us, like the waves in the sea. We are not flesh, any more than the sea-waves are water. We are energy, and energy never dies. Just as the sea-waves’ energy is transformed as it crashes on the shore, and becomes something else – a sound, a wave in the wind, which then joins the rest of the air-currents to make new waves in the ocean – so our life-energy wave carries on too; to where we do not know.

Perhaps, as Jon suggests, it shifts to the quantum universe and enters another dimension. Perhaps his Dad is really an angel after all. Perhaps his Dad and my Dad are sitting together right now, drinking quantum whiskey, and reminiscing about things that never happened.

Just because you cannot see something, it doesn’t mean it isn’t there.