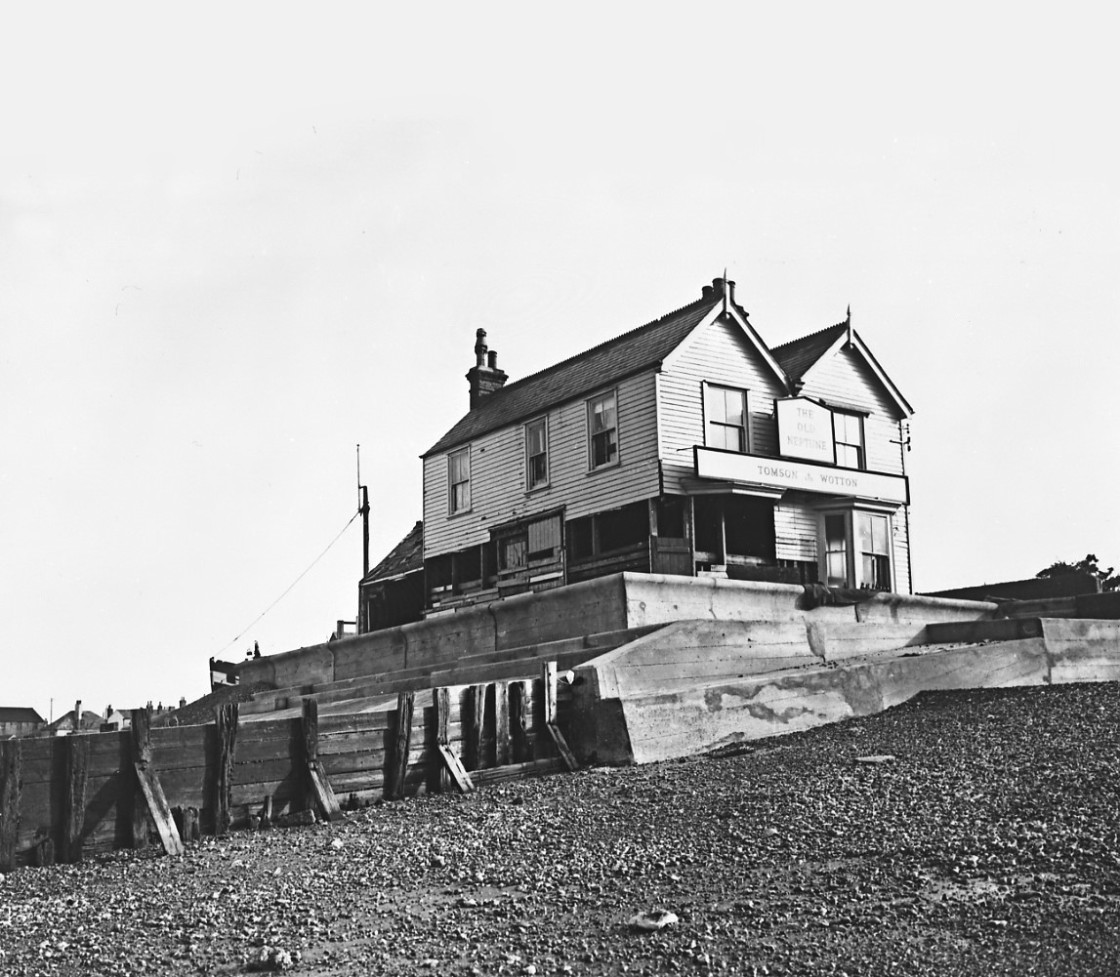 Photograph shows the Neptune prior to the 1988-’89 works. Note the steepness of the beach..

I moved to Whitstable in 1984. It was a different town back then. The main difference was the beach. It was – literally and physically – a different beach. Unlike today, it was nearly impossible to walk the length of it due to the large differences in height between the groynes. There were drops of 10 foot or more in certain places where parts of the beach had been washed away.

The steps on the seaward side of the Oyster building sat in front of one such drop. It was like a swimming pool there, several feet deep. At high tide the sea came within a few feet of the building and you could actually dive off those steps. I know, because I did it.

All that changed when the beach was reconstructed in the late ’80s. Parts of it were dug out and large oblong bales of stones in plastic netting, many tonnes in weight, were laid down, over which shingle was poured. The old groynes were dismantled and replaced with new ones. The work continued for nearly two years, from 1988 to ’89, during which time there was an almost permanent presence of heavy construction vehicles, diggers and lorries on the foreshore.

Further replenishment work took place in 2006, and more work is due in 2021. If you can walk almost the entire length of the beach now, from Admiralty Walk to Tankerton, with only the harbour to get in your way, it is entirely because of the work done previously. It is also this that accounts for the spacious areas of shingle at the landward side of the beach adjacent to the footpath (called “the berm”) that we now take for granted. Prior to 1989 those areas didn’t exist.

All of this was done at public expense, of course. The putative owners of the beach, the Whitstable Oyster Fishery Company, are the beneficiaries of that work, not the instigators. As far as I know, they did not pay for it except in the way all the rest of us did: through our taxes. That goes for every aspect of the beach: its maintenance, its cleaning, its flood defences. None of it is paid for by the owners. All of it is paid for by the public.

Old photographs of Reeves’ Beach show that it was raised during the construction work. Prior to 1989, the pathway on the seaward side of the sea wall was several feet above the shingle, which sloped away at an acute angle towards the sea below. It was not, as it is now, a raised flat area on a level with the path. The entire beach was much less stable back then, much more liable to the constant erosion of longshore drift, as well as the occasional catastrophic shifts that could see whole sections washed away during high tide and stormy weather. No-one would have considered building anything on Reeves’ Beach prior to the work. It would have been impossible.

The fact that the Whitstable Oyster Company are now seeking a licence for an extensive area of decking able to seat up to 120 people on the area of the beach outside the Forge is entirely due to the work carried out in 1989 and 2006, which, as I say, was done at public expense. In which case, maybe if the licence is granted, the public can take a share of the profits? Certainly the amount of rubbish such a development will generate will have to be cleaned up by someone. Currently that “someone” is Canterbury City Council. Will the Whitstable Oyster Company be charged for this service?

We all remember large crowds gathering on Whitstable Beach after the Oyster Company provided a takeaway service for alcoholic drinks after lockdown in March. We’ve also seen the grotesque levels of littering and other antisocial behaviour on the beach since restrictions were lifted more recently. If the licence for such a large area of seating on the beach is allowed, then we can expect more problems of this nature more frequently. We can also expect more development as this would set a precedent.

The Whitstable Beach Campaign has written to all its supporters to register their objections to the application.

We include the text below:

As you know, the Whitstable Beach Campaign was founded nearly twenty years ago with the sole aim to preserve the unspoilt nature of the beach and protect the right of access to it. We believe that the beach, which is privately owned (but publicly funded), is vital to the community as it is a much-loved open space which should be protected for all time.

Please take the time to consider and comment on this proposed development; the impact on the beach, should the proposal be successful, would be significant and permanent.

To respond to this new licencing application, you must give reasons for your comments which must relate to one or more of the following 4 licensing objectives:

a) Prevention of Public Nuisance. The most commonly used reason for making a representation is Public Nuisance, which can cover opening hours, litter, noise, congestion—in this case with pedestrians using footpaths and lack of toilet facilities.

b) Prevention of Crime and Disorder –You should state if you have concerns about the applicants history of maintaining order on this or other licensed premises, e.g. fighting, drug problems, disorder etc. If possible please give details.

c) Protection of Children from harm – this is rarely used but if you believe that, for example, under-age drinkers are being served there, or if there are other child protection issues then you should set out why children are at risk of being harmed.

d) Public Safety – e.g over-crowding, a concentration of customers could put public using the footpath at risk under social distancing guidelines. Additional concerns are lack of hand washing facilities. If you believe that there is any other risk to public safety, you should describe the problem in your letter.

We believe that Canterbury City Council would be negligent in granting an extension of the license to this seafront venue. Issues of particular concern include:

You must provide your name and address.

You may also wish to copy your email to your local councillor: George Caffery, Chris Cornell, Valerie Kenny or Neil Baker.

For info, the chair of the licensing committee is Cllr Ashley Clark.

All photographs courtesy of the Douglas West collection at Whitstable Museum.

CJ Stone is an author, columnist and feature writer. He has written seven books, and columns and articles for many newspapers and magazines.