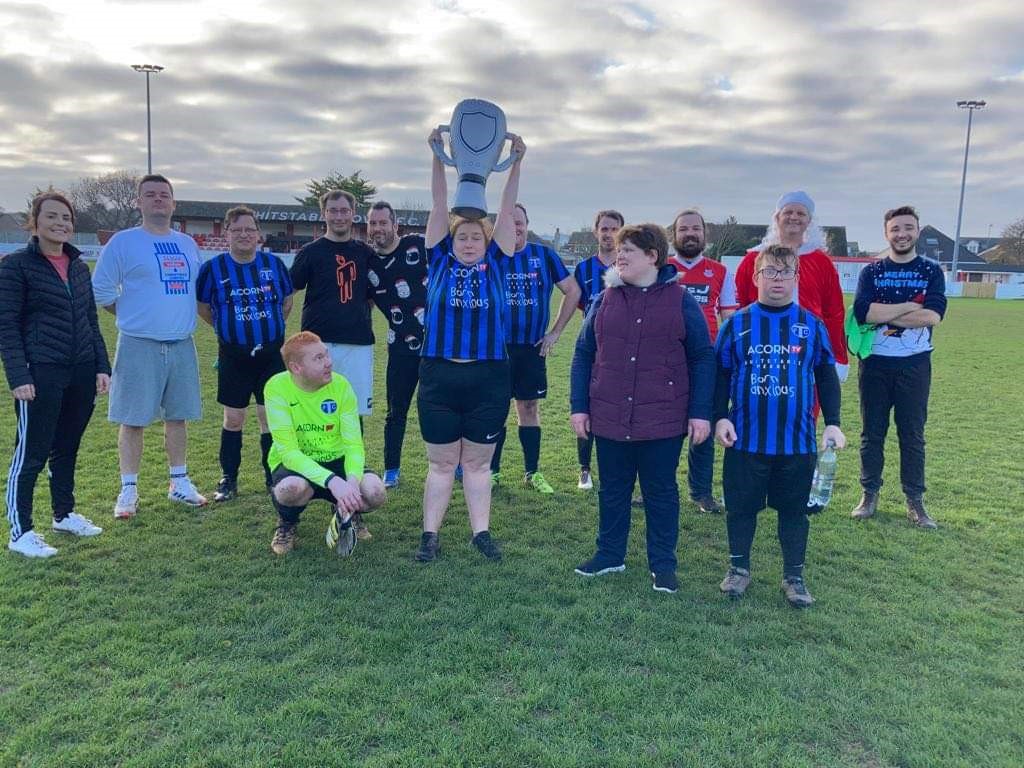 Was I ever a football fan?  No.

Am I now a football player?  Yes!

(And all thanks to Tankerton Football Club…)

I first learned about the charity Tankerton Football Club (TFC) five years ago from my friend, Sally Laker, whose son, Toby, was then a member of the club’s Deaf Children’s Football Team. Sally invited me to watch an indoor match at a local venue and I spent a wonderful evening watching Toby play while I learned how providing access to grassroots football benefits children and adults with physical and learning disabilities. Since that memorable evening, I’ve been strong supporter of the club’s work and their creative fundraising events.

It was in August this year that I learned that TFC was seeking financial help with kit and sponsorship for their newly-formed disAbility Football Team. I discussed this with Acorn TV, the broadcast streaming service responsible for the TV series based on my crime novels, Whitstable Pearl, and was thrilled when the company agreed to sponsor the new team.

That same month, on a lovely sunny day, Acorn’s Marketing Director Jason Gray and I were invited to watch the new team and their coaches at the team’s weekly training session during which we also met a co-sponsor of the team, Kellie Barker, the inspirational special needs parent behind Born Anxious, a company providing sensory clothing for invisible disabilities.

Watching the team play that day, and for the first time in their brand new kit, I also had the opportunity to chat to coach, Tom Saviddes, who explained the team’s need for specialist coaches as the young adults who attend the club have a range of disabilities and their sessions need to be adapted and differentiated accordingly.

It was an enlightening and entertaining day but the last thing I ever imagined was that during my next visit to the team I might actually find myself playing football with them. However, just a couple of weeks ago I received an invitation from TFC’s Vanessa Oakes to join the Carers and Parents team playing against the disAbility team in a pre-Christmas match on the hallowed turf of Whitstable Town Football Club – to whom TFC are immensely grateful for the privilege.

With my 69th birthday fast approaching and having been virtually chained to my laptop for much of the past two years while I finished writing a new book, during Covid lockdowns and Tier restrictions, I can admit I have never been less fit. I assumed positioning myself in goal would be the quietest place to be – but then I didn’t reckon on the skill of the opposing team…

Beyond knowing that football’s a game of two halves I’m embarrassingly ignorant of football regulations– especially the unfathomable offside rule. I also have no idea about how to deliver a sling throw or a bicycle kick but I was able to comply with the strict instruction to “wear a Christmassy headdress” and duly arrived at Whitstable FC’s ground wearing a velour turkey on my head… courtesy of George’s Mini Market.

Santa Claus was already there so I didn’t feel out of place but once I was handed my swanky Slazenger goalkeeper’s gloves, I began to suspect the game was about to become far more serious than I had bargained for…

During a short warm up session (which almost killed me), I managed to keep a smile on my face before scuttling off to what I thought would be the safety of the goal mouth. Once there, I realised my first problem was trying to recognise which side I was playing because I had turned up wearing one of the “strips” that Acorn TV had sponsored – which were also being worn by the opposing disAbility team who, thankfully, seemed very busy defending their own goal – at first anyway….

Lulled into a false sense of security, it wasn’t long before the ball action began heading my way and although the first few strikes failed to find their mark, the ball was suddenly by-passing me into the back of the net as though my body was perforated by a million football-sized holes!

My fellow team members, including Father Christmas, were magnanimous in defeat – even when the final strike whistled past my head into the net. “How did that happen?” I asked, astonished. “Don’t worry,” said Santa, “no-one could have stopped that one.” And he was quite right. It was a spectacular performance by the disAbility team – even Ederson couldn’t have prevented disAbility from winning.

After handing out some Christmas crackers, it was left only for me to say a few words to congratulate the winning side before handing the inflatable silver trophy to the deserving members of the disAbility team. I recognised that an hour and a half had magically sped past with this extraordinary match having transformed me from spectator to a keen player.

Once upon a time, while watching a World Cup match I had mused that perhaps the dimensions of a football goal area should be made larger so that more goals could be scored within a match, without a game having to be determined by a penalty shoot out. I have to say there was no need for that with me as goalkeeper, because the final score of our match had been Carers and Parents – 2. disAbility players – 5!

If my time on the pitch had come to a sad and sudden end just when I had discovered the joys of community football – I had cause to think again when I received a message from Vanessa as follows, “you may be called to play again in the spring now you are officially our goalie ”

How you can help TFC:

A crowdfunding campaign has been launched to secure Tankerton Football club’s new home ground on “The Bends” between Whitstable and Herne Bay, but it needs our help to reach its target of £20,000.

There are lots of rewards still available within the crowdfunder, including the opportunity to explore the nature reserve at the site. For a £15 donation, recipients can spend a morning bird watching in one of the 3 bird hides on the nature reserve.  Pledge £20 and get a tour of the reserve and a half-day session of bee or butterfly watching.

If you feel you can support the club with a donation, no matter how small, I promise you it will be gratefully received and put to great community use.

Remember, the individuals attending weekly sessions at the club typically face significant inequalities on a daily basis and are invariably excluded from mainstream sporting activities. The provision of meaningful sporting opportunities is not only fundamental to the club members’ physical and mental well-being, it’s also proven to be beneficial for improving social skills, co-ordination, cognition, confidence and self-esteem.

I can personally vouch for that.

Huge thanks to Whitstable Town FC for allowing TFC to play on their ground.