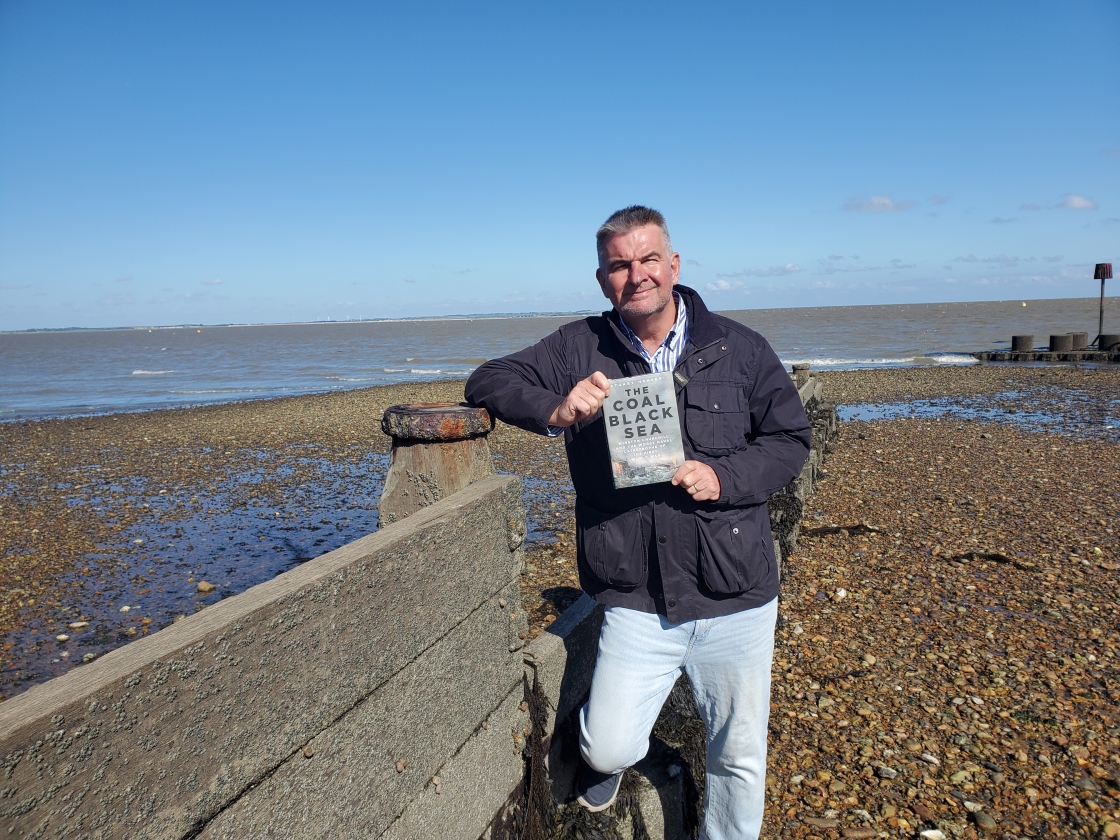 Just six weeks into the First World War, six Whitstable men lost their lives on the same warship on the same day, and the truth about how they were dishonoured and the role played by Winston Churchill is revealed in my new book The Coal Black Sea published this week by the History Press.

On the murky morning of September 22 1914, three British armoured cruisers, HMS Hogue, Aboukir and Cressy, patrolling in the southern North Sea, were sunk by a single German U-boat. Forced to abandoned ship, men desperately clung onto pieces of driftwood, battling hypothermia as the frigid sea was turned inky black by the coal released from the ship’s bunkers. The incident claimed the lives of 1,459 men and boys, some as young as 15 years old.

The death toll was higher than that at the Battle of Trafalgar or the sinking of the RMS Lusitania. It inflicted a terrible blow on families ashore, made front-page headlines in national newspapers and shocked the nation.

As in many port towns, scores of local men in Whitstable were members of the Royal Naval Reserve (RNR) and were called up for active service at the outbreak of war in August 1914. They were all professional mariners who volunteered for regular naval training in return for a modest pension in order to help man Britain’s massive fleet in time of war. In September 1914, it was reported that 37 Whitstable reservists were serving with the fleet.

Most of those from Whitstable worked on the oyster smacks in the Swale estuary, employed either by the Whitstable Oyster Company or the rival Seasalter & Ham Oyster Fishery Company. In wartime, they were encouraged to join ships with their mates, so eight from Whitstable joined one of the three ill-fated cruisers, HMS Cressy. Six weeks after their patriotic send-off in Gladstone Road, only two returned home to their families.

RNR seamen George J Keam of 54 Middle Wall, Henry Phillips of 22 Waterloo Road, Frederick W Down of 17 Middle Wall, James “Fred” Wootton of 20 Middle Wall, Jack Baker of 8 Fountain Street and Charles W Jordan of 66 Albert Street were all lost. It took several days for the tragic news to be confirmed and for the dreaded telegrams to be delivered to homes separated by only a few yards.

The wife and three children of George Keam were picking hops just outside the town when they heard the terrible news. Mrs Keam collapsed with shock and a family portrait was taken shortly afterwards with an image of the dead hero, George, superimposed in the background. The reservists tended to be older family men, so the impact ashore was that much worse.

The reason the two Cressy survivors from Whitstable, Alfred Stroud and James Rowden, made it home was that they were manning one of the sea boats tasked with rescuing men from the cold sea.

Another man, from Seasalter, Reuben J Johnstone, was also lost while serving as a sick-bay attendant in HMS Aboukir.

There are still traces of the tragedy in the town. The six names of those lost are inscribed on the war memorial outside the library, but there is no clue as to how or why they died. The Royal Naval Reserve pub is testimony to the importance of the RNR to local maritime heritage and the name of one victim, George Keam, is coincidentally preserved at Keam’s yard car park. Some local historians have undertaken research into those lost, but, until now, no-one knew the truth about how these brave men — and many others —were stitched up and dishonoured.

There were no anti-submarine weapons or even anti-submarine measures available to the captains of the three ships, yet they were patrolling at slow speed off the Dutch coast, less than 150 nautical miles from the main German submarine base at Wilhelmshaven without escorts. Once torpedoed, there were no life jackets or survival gear, and most of the sea boats had been landed at Chatham dockyard at the outbreak of war. Any intelligence about submarine movement could only be obtained in port for fear of wireless signals being intercepted by the enemy.

The ignominious reverse threatened wartime morale. It was the biggest story of the war to date and it did not fit the expected script of a glorious naval victory. For the Admiralty and its top brass, it was an embarrassing disaster and not least so for the First Lord of the Admiralty, Winston Churchill.

Churchill was 39 years old at the outbreak of war, yet he had already served in senior cabinet posts and experienced wars in several continents both as a journalist and junior army officer. He was a highly ambitious, energetic and opinionated celebrity politician with the Midas touch. But for the first time in his career, things were not going according to plan.

He was widely criticised in the press and even accused of meddling in naval operational detail and ignoring professional advice from senior naval officers to remove the three cruisers from their vulnerable patrol zone. Expert naval correspondents questioned the sanity of putting three ships in such an exposed location and questioned why the mighty Royal Navy was so ill-prepared for anti-submarine warfare.

So, while the families of the 1,459 dead in Whitstable and elsewhere mourned their loved ones and braced themselves for the financial catastrophe of losing their sole family breadwinner, Churchill set to work.

Instead of addressing the unforgivable absence of anti-submarine measures, Churchill, the master of prose, embarked on a campaign of spin to deflect the blame from himself and onto those serving at sea. He released press communiques suggesting that the ships lost were obsolete and expendable, manned by part-timers and that the commanding officers had made errors of judgement in stopping to rescue drowning sailors rather than flee the area.

Captain Johnson of HMS Cressy was dead, so hardly in a position to defend his actions or his reputation. Many of his colleagues were furious he was being hung out to dry in the press with no right of reply. An official court of enquiry found the Admiralty largely responsible for the disaster, so Churchill hushed it up and stuck to his preferred press narrative of a minor setback involving obsolete ships manned by incompetent part-time reservists and commanded by gallant old duffers.

It saved Churchill’s skin, at least in the short term, but it also grossly dishonoured those that had served that day. All accounts of the action, including the official enquiry, confirmed that all of the three ships companies, including the Whitstable eight, acted with enormous gallantry, steely calm and professionalism at all times. Sailors in Cressy were still defiantly firing their 12-pounder guns into the air as the ship capsized. The truth was that they were all brave professional seamen through and through and they never had a chance in hell—and that wasn’t their fault.

Many in Parliament and in the upper echelons of the Royal Navy knew Churchill’s version to be a misleading narrative designed to deflect blame and protect his reputation. Curiously, though, most of the official histories prefer Churchill’s version of events and later, once he had become a national icon, no-one was interested in investigating the truth about the loss of 1,459 sailors.

The result was that the Whitstable eight and their shipmates were never properly honoured or commemorated until a retired Dutch physics lecturer called Henk van der Linden went to extraordinary lengths to have the men of HMS Hogue, Aboukir and Cressy properly commemorated 100 years after the event. He published a book about the incident and instigated at a full-scale memorial service at Chatham Historic Dockyard in 2014. Even then, none of those family members attending knew the entire truth behind the incident, or Churchill’s role in it.

Does it matter after all this time? After all, many more lives were lost on the Western Front and at Gallipoli, and today there is a European war raging in Ukraine. Well, to me it does matter because Churchill distorted the truth and relegated an important naval action to the footnotes of history. It was misleading and unfair to portray those reservists as part-time amateurs. And it was not an insignificant anomaly as he suggested — this was part of a series of significant naval blunders while he was in charge at the Admiralty that eventually led to him being sacked in April 1915.

My great uncle, Leading Seaman Will Potter died on the Cressy that day too. Possibly, he was mates with some of the Whitstable eight. Even though I served in the Royal Navy in my younger days, no-one in my family ever talked about Uncle Will and the First World War: I found out by accident. Maybe there was an element of shame created by Churchill’s spin about those old reservists whom he implied weren’t quite up to it.

Like Potter, the eight professional mariners from Whitstable joined up to serve their country and performed with professionalism and gallantry. Six lost their lives. They were war heroes but were dishonoured to protect political reputations and their families were left to fend for themselves.

Even after some 108 years that should still matter, particularly in Whitstable.

FOOTNOTE The Coal Black Sea, Winston Churchill and the Worst Naval Catastrophe of the First World War by Stuart Heaver is published today by the History Press (ISBN: 9780750999601). The official book launch event will be hosted by Chatham Historic Dockyard on 6 July at 18:00 and there will be a free community talk at Whitstable Community Museum and Gallery on 3 September at 19:00. For details of those and other local talks and events, visit www.stuartheaver.com.